In this demo-focused virtual class students will learn how to make a saddle setting for a drilled paddle stone and attach that via hinge to a bezel set cabochon. This course will also cover making a safety catch for the ear wires so the earrings don’t go flying off when you’re head banging to death metal music or base jumping from a skyscraper. 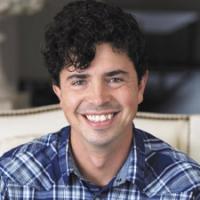 When Alex Boyd was a young boy he stole an enchanted ring from a powerful bruja. That night his slumber was disturbed by a tapping at his window. When he slid the window open a huge raven rushed in, flew around the room and perched on his bookshelf. "I know what you have taken from me," the raven cawed.  "I don't know what you’re talking about," Alex lied, hiding his bejeweled finger behind his back. "No matter.  It is your problem now. The wearer of that ring is indentured to create more talismans of power, either for 1000 years or until he makes something so sublime, so perfect, so beautiful that the spell is broken and he is freed." "1000 years it is," Alex said as he thrust the raven out the window and slammed it shut behind her.  He has been making jewelry ever since.

Click HERE for a comprehensive list of supplies that will be used for course demonstrations and objectives. Student participation during or in-between class sessions is not required - observers are welcome.