The Hydraulic Press: Basics and Beyond

The hydraulic press provides limitless opportunities for creating exciting forms and textures. Discover how to use found objects to emboss metal, as well as how to make your own embossing tools and silhouette dies. A range of Bonny Doon tools will be covered and explained during the class - including anticlastic, synclastic, free-form, and 3 inch deep draw tools. Mastering these tools and techniques will allow students to produce bracelets, rings, earrings, beads, lidded containers, and vessels. This class will demystify urethanes and dies while providing students with hydraulic press confidence.

This course will be process-oriented, rather than project-based, and examples of various techniques will be heavily utilized throughout the workshop. Demonstrations will alternate with time for hands-on practice. Participants will be encouraged to practice each technique after the demonstration, while also pursuing their individual design interests. This workshop is appropriate for students with basic metalsmithing skills as well as professionals. 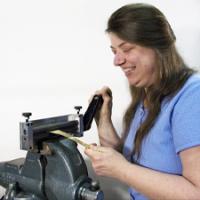 Whether using hammers and stakes, or hydraulic press tools, Cynthia's sculptural jewelry and hollowware shows her focus on exploring the fluidity with which metal can be moved, formed, and joined.

Cynthia Eid co-authored the book Creative Metal Forming, with Betty Helen Longhi, published in 2013 by Tim McCreight's Brynmorgen Press. In his foreword for the book, Michael Good says the authors "have succeeded in assembling the first comprehensive textbook on synclastic and anticlastic forming." (More about the book available at www.creativemetalforming.com.)

Cynthia and Betty developed a set of anticlastic stakes, and Eid also works with Knew Concepts and Bonny Doon to help make tools for jewelers and metalsmiths. Lee Marshall has dubbed Cynthia Eid "Godmother of the Knew Concept Saws" since it was her idea for him to produce these saws for jewelers.

Excited about working in sterling silver without the problem of firescale, Cynthia has been working with Argentium Silver since 1999. After meeting Peter Johns (the inventor of Argentium Silver) in 2003, Eid has participated in AS's development. Argentium International, Ltd recognizes her as a Pioneer.

Cynthia Eid's metalwork has won awards for creativity and design, been featured in many publications, and been exhibited internationally. With a BS in Art Education and MFA in Jewelry, Design, and Silversmithing, she has previously worked as a bench jeweler for fine goldsmiths, a model-maker in a gold jewelry factory, and on private commissions. Her work is in museums in the US and UK. Currently an independent metalsmith and educator, she teaches weekly classes at Metalwerx in Massachusetts, and workshops and short courses in the US, Canada, Europe, and Australia.

There will be an extensive metal, tools, and materials kit available for purchase from the instructor. It is estimated to cost $65 and includes base metal to practice each of the techniques shown during class, as well as materials and tools to make embossing and silhouette dies. If students wish to work in silver, they should bring their own. Kit include:

Nugold or bronze sheet: (or red brass, Jewelers’ bronze, or Merlin’s gold----these alloys that are 85-90% copper and 10-15% zinc have many names)  This is a good practice metal, since it works similarly to sterling silver.

Silver: students may bring Argentium Sterling or traditional sterling silver to work in if they wish to work in silver.  Fine silver can be good for small jewelry or if it is to be enameled. Silver not included in kit.

Also available for purchase at workshop:

Many of these items can be found in the Metalwerx studio, but if students prefer to use their own tools, they can bring any of the following: